See page on explanations, sales conditions, costs of shipping and on how to order and to pay.
Paypal, VISA, Euro-Mastercard & American Express cards are accepted

The shares of Equicorp Industries, incorporated in Ontario, Canada, together with those of QCI Industries and Mircan Industries, were being sold at people's doors and through banks in The Netherlands and Belgium in the 1970's. A Dutch person told me that he paid in that manner 2000 Dutch Guilders for a piece of 300 shares Equicorp. It appears that it all became a great scam.
I'm afraid that the owners are now holding nothing more than collector's items.

Read below what I have found out so far.
Please inform me if you have more information !!

This cover-folder (to keep the shares) shows the Toronto city skyline on the front and other real estate and industry projects inside. On the back many graphs of Canada's booming economy.

As stated on this cover-folder the aim of the company was to invest in real estate (they owned appartment houses in Toronto and Kitchener), but also in young industrial enterprises.

The shares that I have seen were all typed out in the name of Blanchard Nederland, commissionairs in effecten (stockbrokers) in Rotterdam. Handelsregister (Trade register number) 119751. But shares may have been issued in the name of other persons or broker houses.

I do not understand how this worked. The investors may have received evidence of payment for their investment (however, I have never seen such documents), but it was Blanchard Nederland that seemed to remain the legal owner of the shares. Nevertheless I have found on the back of one scertificate the signature of the director of Blanchard Nederland, mr. G. Jacobson. But on the back no investor's name is filled in. 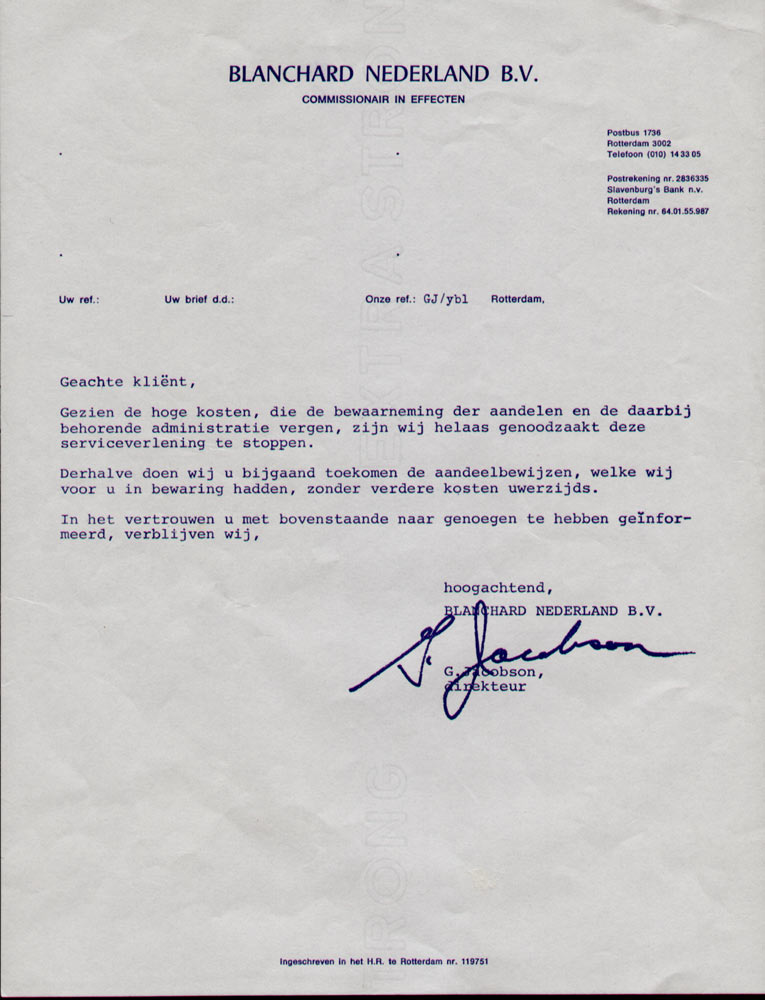 A company with exact the same name, also established in Rotterdam, and officially inscribed in the trade register, has nothing to do with the former stock brokers. They derive their name from Ken Blanchard, and from Blanchard International, a company that gives training courses. In 2011 I learned that they had moved to the city of Amersfoort.

Mr. Holterbosch informed me that he bougt shares in Equicorp Industries Ltd. in 1974 through the Nederlandse Middenstandsbank. So, there must have been more channels trough which investors could buy these shares.

Mr. van Kempen found out that:

At that same address seated Micron Industries Ltd. Both companies were related to Mirtone industries Ltd. After this the trail went dead. At Mirtone they could not or did not want to give any further inormation.
Bob Treadaway informed me that Mirtone Industries has been bought in the late 1980's by Edwards Inc. of Owen Sound, Ontario.

As will be outlined below in a pritty complicated manner, the trail leads in the end from Equican Ventures Inc. to finally Genterra Investment Corporation on June 8 1999. The text below was sent to me by Patty and Reeve. It is the answer they got from Tim Bradburn, Inquiries officer of the Ontario Securities Commission ("OSC") in answer to their request for information. I put in the underlining and bold characters for eysier reading:

Thank you for your inquiry to the Ontario Securities Commission ("OSC") regarding shares you hold in certain companies as evidenced by recently discovered share certificates.  A review of your matter has been conducted by Commission staff and I welcome this opportunity to reply.

Please inform me if you have more information !!

I have collected the following material sofar:

The engraving on the share certificates shows a graceful woman.

With thanks to the family De Kleine, Hero Fennema, Patrick de Ridder, dhr. van Kempen, mr. Holterbosch, Patty and Reeve for their information and / or collecting material.

See page on explanations, sales conditions, costs of shipping and on how to order and to pay.