Hermes is sometimes called Argeëphontes or Argofonias, i.e.the murderer of Argus. The underlying story is the following (source: Souli, 1995, p. 40).

In Argos lived Inachus' most famous daughter Io, a beautiful girl who became a priestess of Hera and attracted the amorous attention of Zeus himself. Zeus, although being married to Hera, seduced many a beautiful woman, often in disguise (methamorphosis). In the diguise of a cloud, he seduced Io as is depicted in a painting by Correggio. 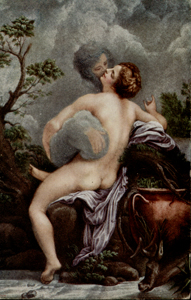 Zeus, in disguise of a cloud, seduces Io

His wife Hera, seeing them in each others arms, flew into a rage with Io and turned her into a cow. Then she tied the cow to an olive-tree in the sacred grove of Mycenae and set Argus the All-seeing, of the line of Phoroneus - a beast with eyes all over his body and tremendous strength - to keep watch on it (we still have the expression to watch Argus-eyed; NL: kijken met Argusogen). But Zeus set Hermes to steal Io, which he did by lulling Argus to sleep with the music of his pipes. But no sooner was this done than Hera sent a gadfly (NL: horzel) to persecute the unfortunate Io whom it caused to run madly  from one country to another. After crossing the Ionian sea (and thus giving it its name), Io wandered through Illyria, Aenus, the Bosporus (= "ox-crossing" / NL: koeieneweg), the Crimea and Asia, coming ultimately to Egypt and resuming human form. There she maried king Telegonus and, after her death, was worshipped as a goddess under the name Isis. (source: Mavromataki, 1997, p. 213,214 and Hull, 1993, p. 173/4).

In art Argus is usually depicted as a muscled shepherd with 2 eyes only. Hermes plays a  sheperd's flute or approaches with a sward. Io stands quietly grazing. Sometimes Hermes places a foot on a cut off head, referring to this episode.

In the famous painting Mercurio y Argo from the Spanish painter Velasquez, (depicted on a share from the Spanish Banco de Cartagena; see below) Io is lying down, the muscled sheperd is sleeping and Hermes slinks towards his prey, drawing his sword.

Banco de Cartagena
Cartagena, Spain, 1900; Accion al Portador De Quinientas Pesetas (bearer share of  50 (?) Pesetas); Print by Arnoud - Lyon / Paris; 20 by 10 cm black engraving of the famous painting Mercurio y Argo (Mercury and Argus) by D. Velasquez (1599-1660); VF+: one faint middle fold with a 1 cm tear in left border (on the fold, but hardly visible; a few small wrinkles in left upper border); price 125 Euro. order here.
The picture shows the god Hermes (L: Mercury) drawing his sword in order to decapitate the shepard who guarded princes Io, who had been transformed into a white cow by Zeus (L: Jupiter).
When Velasquez was commissioned to do the interior decoration of the famous Alcazar palace, he made 4 paintings with mythological subjects. Only this painting was preserved, now hanging in the Prado museum in Madrid.

Making use of this text or parts of it is encouraged, but is only allowed when mentioning
copyright, 2002/20: Dr. Hugo H. van der Molen; http://www.scripophily.nl
This copyright will be strictly enforced and any infringement of  this copyright can be legally prosecuted.
Usage of this text without giving the source would reflect a lack of appreciation for the extensive, often time consuming research that writers of this type of articles often carry out  in order to give their hobby more content for him- / herself and others. Reference to this source is also appreciated if you derive only part of your text from this article.
See page on explanations, sales conditions, costs of shipping and on how to order and to pay.